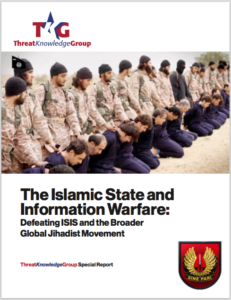 Dr. Waller’s paper, “Designing an Information Warfare Campaign Against the Global Jihadi Movement,” was published as part of a report for the John F. Kennedy Special Warfare Center and School, US Army Special Operations Command. The 2014 report was commissioned by the Threat Knowledge Group’s and published in 2015 as a chapter of The Islamic … Read more