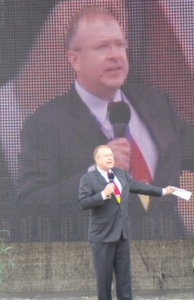 J. Michael Waller is a scholar-practitioner in strategic communication and unconventional conflict.

Presently he is President of Georgetown Research, a political risk and private intelligence company in Washington, D.C.; and is Vice President for Government Relations at the Center for Security Policy. He was founding editorial board member of NATO’s peer reviewed Defence Strategic Communications journal (2015-2018), and a senior analyst with Wikistrat.

Dr. Waller holds a Ph.D. in international security affairs from Boston University. He received his military training as an insurgent with the Nicaraguan Democratic Force (contras). For 13 years he was the Walter and Leonore Annenberg Professor of International Communication at the Institute of World Politics in Washington, D.C., where he designed and taught the world’s only graduate program on public diplomacy and political warfare.

He is author or editor of books relating to intelligence, political warfare, public diplomacy, terrorism, and subversion. See his page on Academia.edu.

Summary of Experience and Skills

Editorial board member since 1992 of Demokratizatsiya: The Journal of Post-Soviet Democratization, first published in cooperation with the American University and Moscow State University, and presently with the George Washington University.

Dr. Waller holds the British hereditary title of 10th Baronet of Newport, Tipperary. As an American citizen he does not use the title.