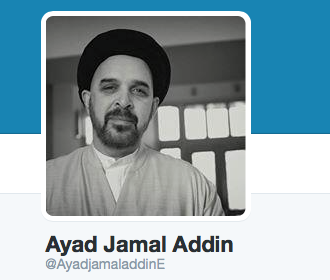 “Donald Trump – he is the 45th president of USA,” Ayad Jamal al-Din said Tuesday on Twitter. “I predict the start of the de-Islamization era” if Trump is elected, the prominent Shiite leader and former member of the Iraqi parliament said in an Arabic tweet from Baghdad. “Trump will eradicate the global Wahhabism virus.”

Al-Din is a strong opponent of Wahhabism, the fundamentalist sect of Sunni Islam practiced by the regimes of Saudi Arabia and Qatar. Those regimes have been responsible for spreading extremist ideology and terrorism worldwide.

Trump’s controversial statements about banning Muslims from the United States until a solution to terrorism can be found earned him bitter denunciations from Muslims and non-Muslims alike.

Not from al-Din, who wears a black turban to show his status as a ‘sayyed’  – a descendant of the family of the Prophet Muhammad. The 53-year-old cleric, who earned his theology degree in Sharia studies in Qom, Iran, is one of his country’s most passionate voices in favor of secular government.

Al-Din practices Shia Islam, the ruling doctrine of the Islamic Republic of Iran and the largest religion by population in Iraq. He has been a harsh critic of the Iranian regime and its interference in Iraqi internal affairs.

Al-Din cheered the U.S.-led ouster of dictator Saddam Hussein, but criticized Washington for dividing Iraq along sectarian lines. When he served as a member of the Iraqi parliament after the invasion, he supported limited government, secular democracy and separation of religion from state.

The Middle East Media Research Institute describes the youthful-looking al-Din as a “foe of Iran.” Al Jazeera, which is owned by the Wahhabi regime in Qatar, called al-Din “controversial” in its English-language reporting but otherwise has ignored him.

In a 2009 speech to the Henry Jackson Society in London, al-Din lamented President Barack Obama’s accelerated withdrawal of U.S. forces from his country.

“When the last American soldier withdraws from Iraq, then Iraq will be declared an Iranian colony that will be ruled by the Revolutionary Guard,” he said.