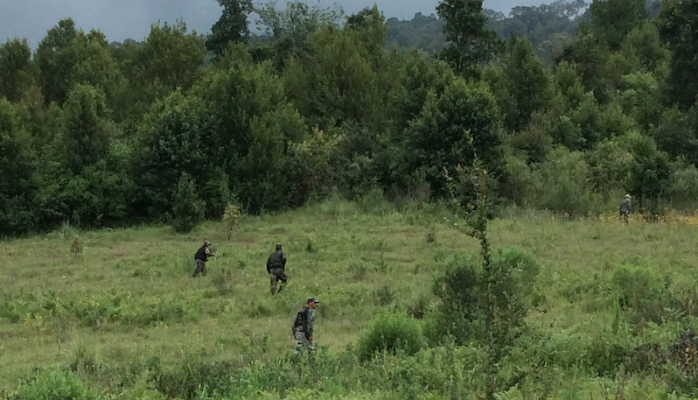 CHERÁN, MEXICO – Some rural Mexicans working in the United States are heading home to revive the forests of their ancestral homeland. Among them are illegal immigrants who found that life can be better back home.

They feel safe in making the trek to their remote homelands in Mexico’s deep southern forests because their communities are self-governing for the first time in generations. In Cherán, 7,800 feet up the mountains between the Pacific Ocean and Mexico City, the sky and water are clean, families and friends are close, and life is simple and sweet.

Since before the Spanish conquest five centuries ago, the Purhépecha and other tribes made their living by tapping resin from the great pine trees. That resin, used for waterproofing, chewing gum and modern industrial and food products, long provided an ecologically sustainable livelihood for the tribe. But in the early 2000s, the Michoacán Family cartel, also known as La Familia, intimidated and bribed local authorities, according to mayors and a former governor of the state.

The locals rebelled and pushed out the cartel. In Cherán, the pine-farming community run by the Purhépecha tribe rose up against the officials whom they viewed to be in league with La Familia, which had stripped swathes of forest bare. The townspeople ran their tormentors out of town, armed themselves with captured police weapons, and declared an autonomous local government. Rather than crush the rebellion, Mexico’s President Enrique Peña Nieto surprised almost everyone by supporting the tribes, recognizing their autonomy, and protecting them from further abuse.

Seated in the back of a battered Ford F-250 pickup truck with long-expired Illinois plates, a pine worker sweeps his hand in an arc across a valley of cornfields. “Four years ago, all that was pine and oak trees,” said Don Santiago, a dry-humored tribal elder whose brother was among those killed by the cartels. “In another year or so, we’re going to start replanting the pines there.”

Seedlings planted after organized crime cartels clear-cut the mountainsides in this rural southwestern Mexico community are drawing Mexicans back home from the United States when the trees grow, their resin will provide a living for region’s inhabitants. Now, with 1.5 million pine seedlings ready for planting, the Purhépechas have armed themselves with modern assault rifles to protect the trees that provide their livelihood.

They’re reviving a way of life that is luring fellow tribe members – many of whom had emigrated illegally to the United States – to come home. “This is the best place to live,” said Marco, who worked for years in southern Alabama. Like the others interviewed by American Media Institute, Marco asked that his last name not be used, for fear of retaliation. He spoke in a mix of Spanish and English, which he said he learned by singing along with Elvis songs. “Alabama has beautiful pine forests, but it doesn’t have mountains like here in Michoacán. This is my home.”

Even American-born members of the tribe are “returning” to their ancestral home to start families. One of them is David Romero, a jovial 30-something Purhépecha born in California.

“My dad moved to Los Angeles when he was young. He built a small upholstery business and became a real success. First, he repaired the seats of cars,” Romero said. “Then, he covered chairs and booths for restaurants. Now, he makes custom seating for hotels and casinos in Las Vegas.”

But Romero preferred the mountainous Michoacán forests of his father’s childhood. High up the slope above Cherán, the dark, fragrant evergreen canopy suddenly gives way to a blanket of ferns, flowering plants and pine seedlings.

“Two years ago, this whole mountainside was a desert of burned stumps and rocks,” said Romero. “The cartels clear-cut everything they wanted and burned what remained. See how we’re bringing the forest back.”

A strong global market exists for Mexican pine-resin products. Over the centuries, pine resin has been used for embalming dead bodies, waterproofing rope and making caulk to seal the hulls of wooden sailing ships. Modern uses include base ingredients for turpentine, solvents, adhesives, paints, chewing gum, and emulsifier for carbonated beverages and sports drinks.

Hurricane Patricia, which devastated nearby areas at lower altitudes in October, largely spared Cherán, far above sea level. Expecting widespread destruction before landfall, the forest workers hoarded corn and rode out five days of relentless rain and wind that made working the trees impossible. “It hit precisely the week before the Day of the Dead, when the tappers work extra hard to tap more resin to pay for the offerings to their dead and other traditions,” said Romero, who runs resin operations for the town. “So this time we weren’t able to make that extra money.”

Even so, people prefer the simpler life in the mountains to life in a foreign city. “We can make a simple but nice living here in the forest,” Romero said. He said he didn’t want to raise a family in the congestion of Los Angeles. So he came to Cherán and returned to his roots, he said, smiling at the thought of his newborn daughter.

Despite its remoteness, Cherán’s residents see themselves as an example to Mexico and the world. Residents said they hope for what they call the “cheranization” of their country, where the people take power from the corrupt elites. Hand-painted graffiti in orange block letters sums up the sentiment: “Wretched are the people whose youth don’t make the world tremble, and where students mind their own business at the foot of the tyrant.”

The key to the future, the townspeople said, is to be vigilant against those who would abuse them. “We don’t fear the government,” proclaims semiofficial graffiti in neatly painted capital letters. “We fear your silence.” The townspeople’s own silence, pine farmer Gerardo said with regret, was what allowed the crime cartels to corrupt the political leaders and destroy the forests in the first place.