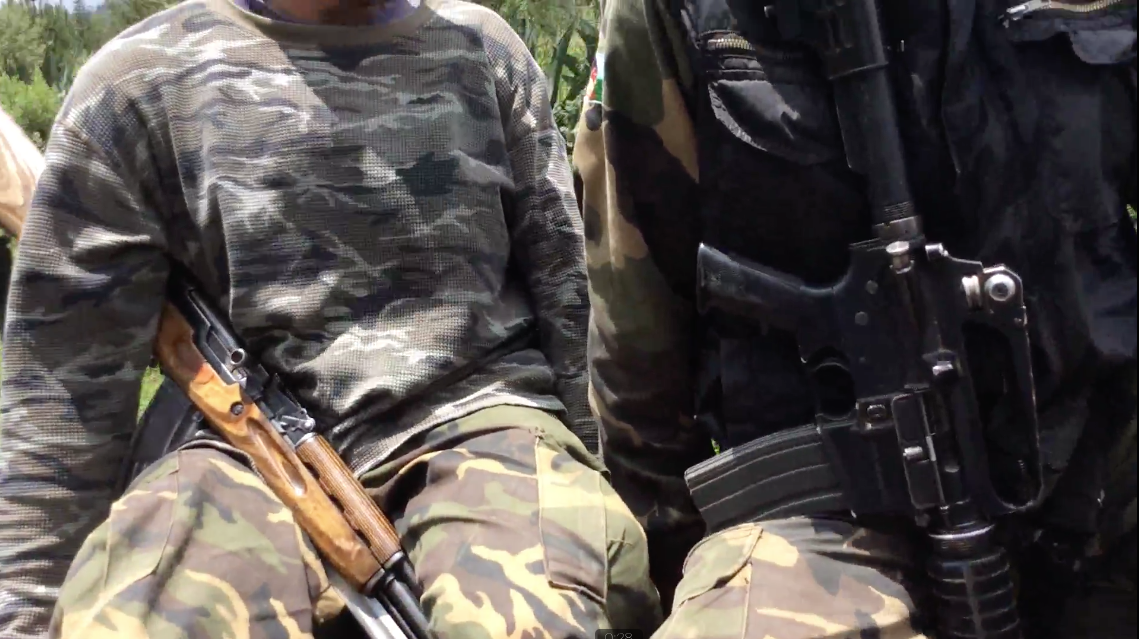 I visited Cherán and walked the mountainside with the guardabosques, writing a two-part series for the American Media Institute that appeared February 25 and 26. Here are the stories, as published in the Lubbock (Texas) Avalanche-Journal:

They aren’t hunting insurgents or drug smugglers, common here in Michoacan state. And they aren’t part of any army. These self-appointed guardabosques — forest guards — are defending the land from illegal clear-cutting by regional organized crime cartels.

In doing so, they illustrate a determination not to succumb to despair in the face of violence — a commitment Pope Francis urged on Mexicans during a visit to Michoacan earlier this month.

Few people interviewed here last year would give their full names out of concern over retaliation. But they were undeterred nonetheless. Jacinto, from a neighboring village, explained what happened: “The trouble began in 2008. That’s when the federal officials came in with the gun registry lists and went house to house. They took our guns away.”

That disarmament effort, to which locals ascribe to nefarious motives, left them with only antiquated single-shot weapons for hunting vermin. These were of little use when the cartel loggers came over the mountain in 2010.

In his cowboy hat and black-and-white plaid shirt, Don Santiago, a 62-year-old wiry, soft-spoken resin farmer of the Purhépecha tribe, said organized criminal syndicates have entered into the large-scale forest destruction business. “We couldn’t go to the police,” he said. “The police were in the pay of the gangsters.”

The main criminal cartels in Michoacán are known as The Michoacán Family, known as La Familia for short, and the Knights Templars, or Templares.

Tension rose as the people of Cherán found their treasured forests being leveled closer to home. Huge, noisy lumber trucks tore through town to haul out the logs, seemingly around the clock. With police and elected officials unwilling to help, a small group of local women, led by a diminutive, five-foot firebrand affectionately known as Doña Chepa, rose up to take their forests back.

“The breaking point came on April 15, 2011,” said David, a big, animated Purhépecha tribesman. “It was Holy Week. The women came to stop the clear-cutters.”

About 15 women piled rocks on the roads as barricades. With the trucks immobilized, the women used rocks and fireworks to chase the cartel raiders away. A church bell clanged an alarm for citizen reinforcements. When the police arrived, the women directed their fireworks on them, pushing them back. “We surrounded all the exits to the town,” David said.

Nothing like this had happened before in Cherán. Energized locals directed their rage at the politicians who had done nothing to stop the deforestation. Armed with their obsolete hunting rifles and shotguns, families converged on the town center. Using one of the abandoned logging trucks as a battering ram, citizens stormed the town administration building and police station and overthrew the local government. The police abandoned their posts — and their weapons.

Mexico’s militarized police, even in small towns, often carry AR-15 assault rifles. Now those weapons were in the hands of the townspeople. “Then we started the rondas,” David said, referring to the armed citizen patrols.

The townspeople created a provisional government and banned political parties so that no candidate for public office would be beholden to outside political forces. They invented an electoral system to eliminate vote-buying and ballot-stuffing. All candidates for public office had to stand in the central square, with their supporters lining up behind them to determine who would win. Gangsters sent agents into the villages to burn cars and homes, and hunt down the guardabosques. In the course of the next three years, 18 of Cherán’s defenders, including Don Santiago’s brother, would be killed, and five more disappeared before the organized crime operations were shut down.

To save face while recognizing reality, the Mexican government officially accepted Cherán’s new autonomous status. It deputized the checkpoint guards and guardabosques as the de facto authority to protect the forest lands. It issued them uniforms as “community police,” without attempting to take away or even register their newfound automatic weapons.

Federal police in shiny black twin-cab pickup trucks, wearing black tactical gear and armed with M4s and an occasional roll-bar-mounted machine gun, patrol the clean superhighways and the potholed back roads of rural Michoacán. The locals generally welcome the federales, sent in last year by President Enrique Peña Nieto to crush the cartels. The federales don’t interfere with Cherán’s guardabosques, and keep in contact with them by radio.

“Our whole way of life is in these forests,” said Don Santiago, the soft-spoken tribal elder. Tapping the resin from highland pines is a way of life, and an art, he inherited from ancestors who can be traced back to the Aztec empire. An individual pine tree can be tapped for up to 80 years for resin sold as raw material for industrial and food products.

“The pines have faces,” said Don Santiago, reflecting the mysticism of his people.