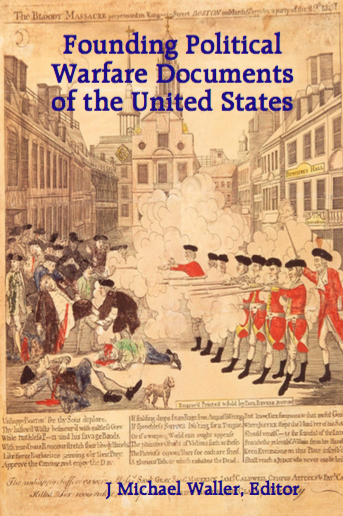 Public diplomacy and political warfare have been an American tradition since before the founding of the republic. The Continental Congress made its case to the world when it was founded in 1774. In this course reader, we take a lengthy look at the complete texts of Continental Congress declarations, from early appeals to neighbors in Canada and to King George III to the Declaration of Independence of July 4, 1776. We also study the texts of essays and writings by eminent political leaders of the day, as well as propaganda art, political cartoons, newspapers and pamphlets, guerrilla theater, military psychological operations, and satire.

This reader is designed to be used in the context of lectures of American and British political warfare of the late 18th century, and as a complement to assigned books on Samuel Adams and the other Boston-based revolutionaries.

Obvious omissions in this reader, such as statements and works by Samuel Adams, appear in the Alexander and Bourne books or the texts by Smith and Taylor.

A common technique of the Continental Congress declarations, pioneered by Samuel Adams of Massachusetts, was to combine statements of high principle and reason with relentless attacks on the British government. Such statements showed the reasonableness of the American cause, and the un-reasonableness of the British who had given the colonies no choice but to secede from the empire. It is instructiveto study how the tone of the Continental Congress changed over time as appeals to reason became more futile.

These letters and declarations are excellent models for public diplomacy today. They seek to build relations with foreign audiences, combining positive messages designed to support the American cause with relentless attacks on the adversary (or enemy).

This collection of pronouncements from the Continental Congress, a public letter from John Hancock, two public letters from General George Washington and a satirical piece by Benjamin Franklin indicate how the American colonists directed their messages at different audiences. The documents show how the thinking evolved from merely demanding the rights of Englishmen to ultimately severing all ties with the country they had considered as their own.