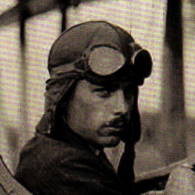 With war raging on the other side of the world, Charlie Meyers left his home in Brooklyn and headed for Canada’ Not to avoid a military draft, but to go and fight. The United States had not yet entered World War l, and Meyers, a young flier during the dawn of military aviation, wanted to battle the enemy. So he offered his flying and mechanical skills to Canada, which was already deeply in combat as part of the British Empire, and was promptly assigned to the Royal Flying Corps in England.

“Charles W. Meyers was not a tall man. He was, in fact, rather short. One comes to realize this only in retrospect, because you would never notice it in his presence,” Joe Christy and Leroy Cookwrote in American Aviation:An Illustrated History (McGraw-HiIl, 1994). “There was something about Charlie–an indefinable something that caused the world to stand aside while he passed. He was a man of courage and talent; he was a man of the sky.”

For the rest of the article, click here for the PDF: WWI_Flyers_Serviam

*Waller wrote the article under the pseudonym Anne Jocelyn.