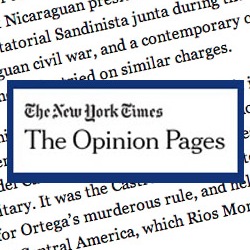 Comment: Decades after losing to Ronald Reagan’s line-in-the-sand in the 1980s, Latin American Marxist revolutionaries continue their fight in a different battlespace: the legal system.

Prosecutions of former military officers and dictators, as I argue in the New York Times, aren’t about justice. They’re about winning a war by other means.

In the May 19 “Room for Debate” feature of the New York Times, the subject focused in the recent conviction of former Guatemalan dictator Efrain Rios Montt on charges of crimes against humanity and genocide. My take presented three main points:

However, one should not run the risk of implying moral equivalence between the United States and the Communists – or, for that matter, the U.S. and Rios Montt. For one, the U.S. under Reagan imposed strict conduct codes on recipients of American military and security assistance, and such aid to Guatemala, apart from counternarcotics support, was very limited at the time – and conditioned on certain standards of human rights.

The shortness of the “Room for Debate” format didn’t allow much elaboration on these issues, and I was too focused on preparing for graduation ceremonies at The Institute of World Politics to follow through with the editor’s very earnest efforts to tighten the piece even further and stay under the 400 word limit.

The “Room for Debate” editor requested credible hyperlinks in English to certain of the assertions in my original text, such as that Salvadoran Vice President Salvador Sanchez Ceren is a mass murderer who was linked to the “suicide” of one of his own Communist comrades, the unlamented Salvador Cayetano Carpio (aka Marcial). The credible stuff is mainly in Spanish, unfortunately, so the editor had to do his duty and cut.

At any rate, the piece was published. For those interested in my full draft as sent to the New York Times, here’s the text:

The conviction of former Guatemalan dictator Efrain Rios Montt for genocide and crimes against humanity in the 1980s should pave the way for other Central American politicians to face belated justice for politically motivated murder.

The Rios Montt prosecution was less about justice and more about using the courts to wage political propaganda campaigns to settle old scores. Rios Montt’s real crime was objectively not genocide, according to prevailing logic, but his political beliefs. His polar opposite contemporaries in Central America must never be prosecuted because they were fighting for progressive ideals.

Let’s take away the political labels and look objectively at the crimes. If Rios Montt is to be found guilty in 2013 for mass murders committed in the 1980s, then current Nicaraguan President Daniel Ortega, who led the dictatorial Sandinista junta as a contemporary of Rios Montt, should be tried on similar charges.

That same justice should extend to former Cuban dictator Fidel Castro and his brother and successor, Raul, who for decades ran the Cuban military. It was the Castro brothers, after all, who directly provided training and weapons for Ortega’s murderous rule, and the spread of Communist insurgency throughout Central America that, paradoxically, Rios Montt used to legitimize his actions.

One of the most notorious Communist guerrilla leaders in El Salvador, Comandante Leonel Gonzalez, not only ordered political assassinations and urban terrorism in the 1980s, but is reputed to have been behind the murder of his own comrade, Salvador Cayetano Carpio. Today, the former Leonel Gonzalez is using his real name, Salvador Sanchez Ceren. He is the vice president of El Salvador. Should he not be tried for war crimes, too?

Ideally, yes. But what purpose would that serve, a generation after the fact? The success of El Salvador as a market economy and multiparty democracy rests on the very uncomfortable fact that, in exchange for peace and national reconciliation, a lot of bad guys had to go free.

As imperfect as the U.S.-backed amnesty-for-peace deals in Nicaragua and El Salvador were, they worked. As rewarding as it would be to see Ortega or Sanchez Ceren or Fidel Castro share the face of Rios Montt, it would not be in the interests of justice. In the case of Rios Montt, justice was not served.

J. Michael Waller is Provost of the Institute of World Politics, a graduate school of national security and international affairs in Washington, D.C. He worked in Central America in the 1980s to help democratic forces defeat Communist revolutionary movements.

PS: Compare the tagline that I provided above with the re-write by the New York Times:

My original: “He worked in Central America in the 1980s to help democratic forces defeat Communist revolutionary movements.”

New York Times rewrite: “In the 1980s, he work[ed] with counterinsurgency forces in El Salvador and with insurgents in Nicaragua.”