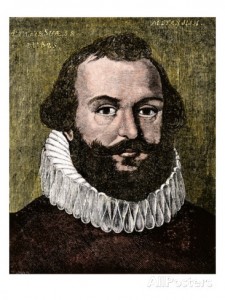 When American troops in Iraq and Afghanistan sit down for Thanksgiving dinner, private security and military contractors will have guarded the convoys bringing the turkey and gravy.

If not for the private security contractor (PSC) business, there would have been no Thanksgiving at all. For it was a PSC whom the Pilgrims hired in 1620 to join them on the Mayflower and provide security for what would become their new colonial settlement in Plymouth, Mass.

Myles Standish was a former English army soldier who had fought the Spaniards in the Netherlands. Private investors called the merchant adventurers financed the expedition of a small group of Puritan religious dissidents to establish a colony in northern Virginia—a royally decreed territory that at the time stretched as far north as present-day New York.

Standish was not a Puritan; he was a soldier and a businessman. He prepared for the Pilgrims’ security before the Mayflower left England. Under the authority of the British government, the merchant adventurers, and the colony’s civilian leader, Standish served the mission for pay.

He certainly earned his money.

Protecting a vulnerable band of immigrants

According to the Mayflower log and historical documents compiled by the late historian Azel Ames, the weaponry aboard the small sailing ship was significant. The private party even had its own heavy ordnance. At least six cannons were aboard the Mayflower.

The Mayflower was not a warship; it was a freighter for the wine trade that seldom sailed out of sight of land. The three-masted vessel was not built for the open ocean. The guns and shot lay at the keel, providing ballast along with bars of raw iron for forging into tools, and extra chain and anchors.

John Carver, the leader of the small religious community of English exiles in Leiden, Holland, chartered the Mayflower and the services of its crew. Christopher Jones, a part-owner of the vessel, captained the 12-year-old ship. Carver hired John Alden, a cooper, and Standish, the military adviser.

Apparently Captain John Smith of Jamestown fame, who had mapped and named New England a few years before the Pilgrim voyage, had sought a contract. The Mayflower group bought his maps but not his services. Smith ridiculed them in his 1630 book, True Travels, Adventures and Observations,for being too stingy, implying that, had they hired him instead of Standish, they would have avoided many hardships. Smith wrote of the colonists who “went to New Plimouth, whose humorous ignorances caused them for more than a year to endure a wonderfull deale of misery, with an infinite patience; saying my books and maps were much better cheap to teach them, than my selfe. . . .”

Like Smith at Jamestown, Standish led the recon missions to find a safe harbor for a settlement, establish relations with the local Indians, build fortifications, and provide the men with military training and organize them into a militia.

He earned his keep. Governor William Bradford would chronicle that as soon as the Mayflower landed on Cape Cod, Standish and 16 men went on a scouting expedition, armed with “musket, sword, and corslet.”

Half of the colonial expedition—Pilgrims and crew, including Standish’s wife, Rose—died by the end of the first winter in Massachusetts. All the survivors, with the exception of Standish and a half-dozen others, fell ill. Bradford recalled the “abundance of toil and hazard of their own health” that Standish and the hardiest displayed. For the sick, they “fetched them wood, made them fires, dressed their meat, made their beds, washed their clothes, clothed and unclothed them.”

The next year, in the new village of Plymouth, Standish supervised construction of a wooden fort at the top of a hill overlooking the harbor and the inland forests, and he mounted the cannons on its second floor. The first level served as a “meeting house” —a combination town hall, courthouse, and church. Sometime in 1621, tradition holds that the colonists and local Wampanoag Indians held the first Thanksgiving feast.

A PSC rises to leadership

Whether due to good relations with the friendly local Indians or the deterrent effect of the well-organized militia and relatively well-armed fort, Plymouth never came under direct enemy attack. But other English colonial towns would. Standish and his men volunteered to come to their aid when threatened or attacked, and in at least one case they left the invaders bloodied and dismembered. Some accounts say Standish led revenge raids and, in one case, used a medieval form of intimidation—mounting an enemy Indian’s head on a pike—to protect the colonists from further attack.

Such operations earned Standish criticism for being too harsh. But the colonists held him in high regard. They repeatedly elected him military captain of Plymouth, and, being accepted by the religious community even though he never joined their church, he held civilian posts as assistant governor and treasurer. He returned to England to renegotiate terms with the merchant adventurers and sell the colony’s debts to other investors. On his return to Plymouth, he remarried in 1623, raised a family of seven children, and founded the town of Duxbury, where he died in 1656.