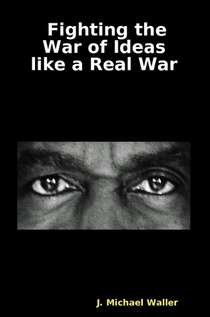 This ground-breaking monograph by J Michael Waller departs from the conventional view of public diplomacy and international communication in time of war and argues for deploying messages as weapons of attack against the terrorists and other extremists.

Proposing an immediate-term strategy that requires no bureaucratic reorganization or major budgetary changes, Fighting the War of Ideas like a Real War is designed for quick implementation in Iraq, Afghanistan and elsewhere.

The book opens with a new view of using information as a weapon of warfare, followed by chapters on the proper use of words to define the conflicts and parties involved, the use of Arabic and Islamic terminology in ways beneficial to the civilized world, effective branding of the enemy and of the war efforts, a “secret weapon that’s worse than death” among Islamist extremists, and a “spectrum of messages” for deployment where Islamist tendencies are strong or growing.