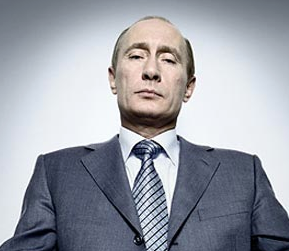 Boris Yeltsin has named the head of the secret police, Vladimir Putin, as his latest prime minister, raising fundamental concerns about the direction Russia is taking.

As a KGB officer he oversaw the Stasi secret police in Communist East Germany. He led a crooked financial empire, some believe, before becoming head of the Russian secret police. He’s accused of quashing investigations of high-level corruption and took charge of the upcoming elections. Now Vladimir Putin is Russia’s newest prime minister.

Russians refer to the gangster-tycoons that appear to surround President Boris Yeltsin — including first daughter Tatyana — as “the Family.” And keeping the Family out of prison is what Russia’s desperate president is trying to ensure before his term runs out next summer. Protecting his inner circle, Kremlin observers say, is what motivated Yeltsin to sack yet another prime minister Aug. 9 and replace him with the third KGB man in a row.

“His entourage is in absolute panic,” Victor Yasmann, a former senior analyst at the Radio Liberty Research Institute in Munich, tells Insight.

Seasoned Russia-watchers say Yeltsin’s increased reliance on KGB leaders marks an ominous trend. “In what normal country does one go to the secret services to appoint a new prime minister?” asks Professor Uri Ra’anan, director of the Institute for the Study of Conflict, Ideology and Policy at Boston University.

Putin’s rise gives renewed strength to the St. Petersburg clan of gangster-tycoons, personified by disgraced former privatization chief Anatoly Chubais to counter the Mafia machine of Moscow Mayor Yuri Luzhkov to take control of Russia, according to Yasmann. The new acting premier is described as close to Chubais, one of the Clinton administration’s favorite Russian politicians who heads the state electrical monopoly and serves as his country’s representative to the International Monetary Fund, the World Bank and other financial organizations.

Prior to his appointment as acting premier, the 46-year-old Putin was director of the Federal Security Service — the renamed KGB internal-security organs known by their Russian initials FSB. He doubled as secretary of the presidential security council, an inter-agency body that advises the president on national-security, foreign-policy, military and law-enforcement matters. Yeltsin also placed him in charge of “safeguarding” the upcoming parliamentary and presidential elections. Putin reportedly speaks German and English and enjoys a friendly working relationship by telephone with President Clinton’s national-security adviser, Samuel “Sandy” Berger.

The Clinton administration says it looks forward to working with Putin.

Russia’s new government leader represents some of the worst elements of the old KGB, Kremlin observers say. His main assignment abroad was a post as KGB commissioner in Dresden, East Germany, where he oversaw the city division of the Stasi secret police in the dark years of the 1980s. So notorious was the Stasi that Nazi hunter Simon Wiesenthal once termed it “worse than the Gestapo.”

Dresden was the second city after Berlin where the East German Communist Party and the Stasi ran the “coordinating committee,” or KOKO, after the German initials, to sell off state property to the West to raise cash for high-ranking officials and the Stasi. U.S. intelligence sources say that, if the Stasi was involved, “at minimum they were coordinated with the KGB.”

That would place Putin near the core of East Germany’s illegal theft-for-hard-currency schemes as the communist regime collapsed.

When the Soviet empire began to unravel, Putin returned to Leningrad (since renamed St. Petersburg) and established the city’s new hard-currency exchange. Matthew Baker of Stratfor.com, a private global intelligence firm based in Texas, tells Insight that Putin put his intelligence contacts to work attracting German banks, including Dresdener Bank, to the city.

Other intelligence sources tell Insight that Putin’s former professor at the local KGB academy, Mayor Anatoly Sobchak, appointed him as first deputy mayor responsible for foreign relations and trade — the heart of corrupt hard-currency operations in the scandal-plagued city council.

There he met Stepashin, then a police lieutenant colonel elected to the Russian parliament whom Yeltsin named secret-police chief of St. Petersburg. Stepashin’s wife happened to be a top executive in a large St. Petersburg bank. Fellow Leningrader Chubais, as presidential chief of staff in 1996, tapped Putin to become Kremlin business manager in charge of the multibillion-dollar empire under presidential control — and to become part of the Family.

Putin’s tenure as FSB director was marred last year by allegations from within the agency that it was involved in extortion and murder rackets. Putin personally took charge of the investigation of the November 1998 assassination of democratic opposition lawmaker Galina Starovoitova in her St. Petersburg apartment building, but allowed the probe to fizzle.

Starovoitova, a prominent human-rights worker and anticorruption crusader, was investigating the contract killing of a St. Petersburg privatization chief at the time of her death. She had frequently directed her ire at the FSB. She even introduced legislation in the Duma, or parliament, that would have banned former KGB officers who engaged in political repression from holding any public office, a law that would have kept the likes of Putin and Cherkesov out of government.

Putin handed the Starovoitova case — considered post-Soviet Russia’s highest profile political assassination — to former dissident-hunter Cherkesov. That action, human-rights leaders argue, ensured that the killers would never be found. Sergei Alexeyev, a local leader of Starovoitova’s Democratic Russia Party, told reporters at the time, “If Cherkesov’s been brought into the case, you can consider it buried.” And so it appears to be.<

A month after the Starovoitova murder, Putin showed his nostalgia for the golden days of the Soviet police state. He gave a televised address on Dec. 20, 1998, to celebrate the 81st anniversary of the founding of the Bolshevik Cheka secret police, praising the Cheka but saying nothing about its systematic executions of political opponents. He then hosted a gala at KGB headquarters to honor the Cheka.

When he rose to lead the day-to-day operations of the presidential security council last March, Putin placed dissident-hunter Cherkesov in de facto control of the FSB. He used his extraordinary Kremlin powers to shut down investigations into financial crimes and corruption. “Over the past three months, Putin has carried out a pogrom of sorts in the Russian judicial system,” according to Yasmann. “One of the main results was to practically paralyze all federal-prosecutor offices around the country. He cashiered federal investigators, including general officers, involved in criminal investigations in state-prosecutor offices probing economic crimes.”

By naming Putin as premier, Yeltsin “has elevated his intelligence chief to meet the challenge of manipulating the upcoming Duma elections” in December, according to Baker.

That’s just part of the suspected reason. Yeltsin has been careful never to anoint a successor. Yet he immediately announced Putin as his choice in next year’s presidential election. “I’m convinced he will serve the nation well while working in this high post, and Russians will be able to appraise Putin’s human and business qualifies,” Yeltsin said in a nationally televised address. “I trust him. I also want everyone who goes to the polls in July 2000 to make their choice to trust him, too.”

Putin was equally emphatic: “I will undoubtedly run for president.” But Yeltsin’s abrupt dismissal of the slavishly loyal Stepashin, known for applying lethal force to keep the president in power, and Yeltsin’s unprecedented display of support for a successor at a time when his endorsement would be considered the kiss of death, are raising questions about the Kremlin’s byzantine politics.

“It could be that the Yeltsin camp would like Stepashin to lead a fake opposition to Yeltsin, to make him a kind of victim in order to gain support of the electorate. The only way to win an election in Russia is to be against Yeltsin,” in Yasmann’s view.

But will it work? “The Family wants to avoid having someone in power who can put them in jail,” Boston University’s Ra’anan tells Insight. “How does the Family get immunity and impunity for itself? I don’t think there is a way. Whomever they appoint may turn on them to show they are in charge, when it becomes convenient.”

“When the time comes for Putin to go, he may not, since the resources at his disposal to affect the elections can as easily be used against Yeltsin as for him,” argues Baker. “Yeltsin may just have handed the keys to the Kremlin to the successor of the KGB.”