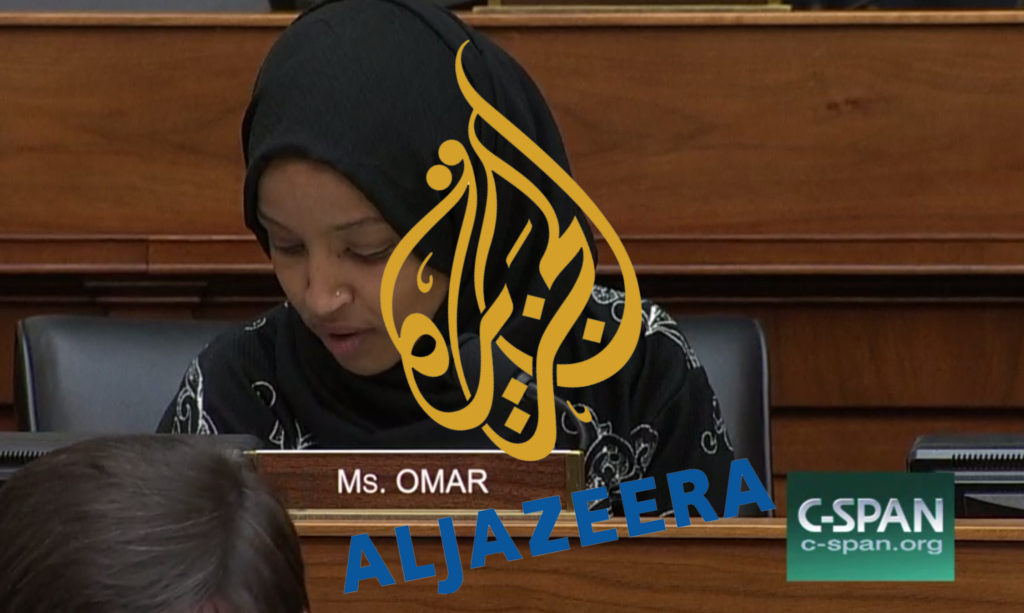 Al Jazeera ran a story, “Who is Elliott Abrams, US special envoy for Venezuela?” on February 12. It had no byline.

Omar recycled the story in her scripted attack against Abrams at a House Foreign Affairs Committee hearing on February 13. The video of the hearing shows that Omar did not publicly inform the Committee that she was quoting from a foreign state-funded propaganda source.

The key themes from the Al Jazeera article match with Omar’s comments to Abrams, and appear in the same order. Some of the phrasing is similar and sometimes identical. Here they are, for comparison:

Al Jazeera: “In 1991, he [Abrams] pleaded guilty to two counts of misleading Congress about the Reagan administration’s efforts to help the Nicaraguan guerrillas (known as the Contras) during a period when Congress had banned such aid. He was later pardoned by George HW Bush.”

Omar to Abrams: “Mr. Adams [sic], in 1991, you pleaded guilty to two counts of withholding information from Congress regarding your involvement in the Iran-Cortra [sic] affair, for which you were later pardoned by President George H. W. Bush.”

Al Jazeera: “A decade earlier, he sought to discredit witness accounts of a massacre in the indigenous El Salvador community of El Mozote and surrounding villages, in which Salvadoran troops rounded up men, women and children, gunned them down and set their homes on fire. Some 1,000 people were killed by soldiers of the Atlacatl Battalion, who had recently been trained by the US.”

Omar to Abrams: “On February 8, 1982, you testified before the Senate Foreign Relations Committee about US policy in El Salvador. In that hearing, you dismissed as Communist propaganda report about the massacre of El Mozote, in which 800 civilians, including children as young as two years old, were brutally murdered by US-trained troops. During that massacre, some of those troops bragged about raping a 12 year-old girl before they killed them. Girls before they killed them.”

Third theme: Fake narrative of supporting atrocities in the service of US interests

Al Jazeera: “‘Committed to mass killing in the service of what could be defined as US interests or even US whim. . . .’”

Omar to Abrams: “Yes or no: Would you support an armed faction within Venezuela that engages in war crimes, crimes against humanity, or genocide, if you believe they were serving US interests,  . . . The question I had for you is that, the interest – does the interest of the United States include protecting human rights and include protecting people against genocide?”

Al Jazeera: “. . . because, in fact, although it was being portrayed by Abrams and others at the time as a battle to prevent El Salvador and Guatemala and Nicaragua from becoming wings of the Soviet Union . . .”

This writer, as a former graduate school professor, would have failed a student for cribbing words, facts, and narratives without citing the source. A quick check of online plagiarism detection services shows that Omar did plagiarize her material: