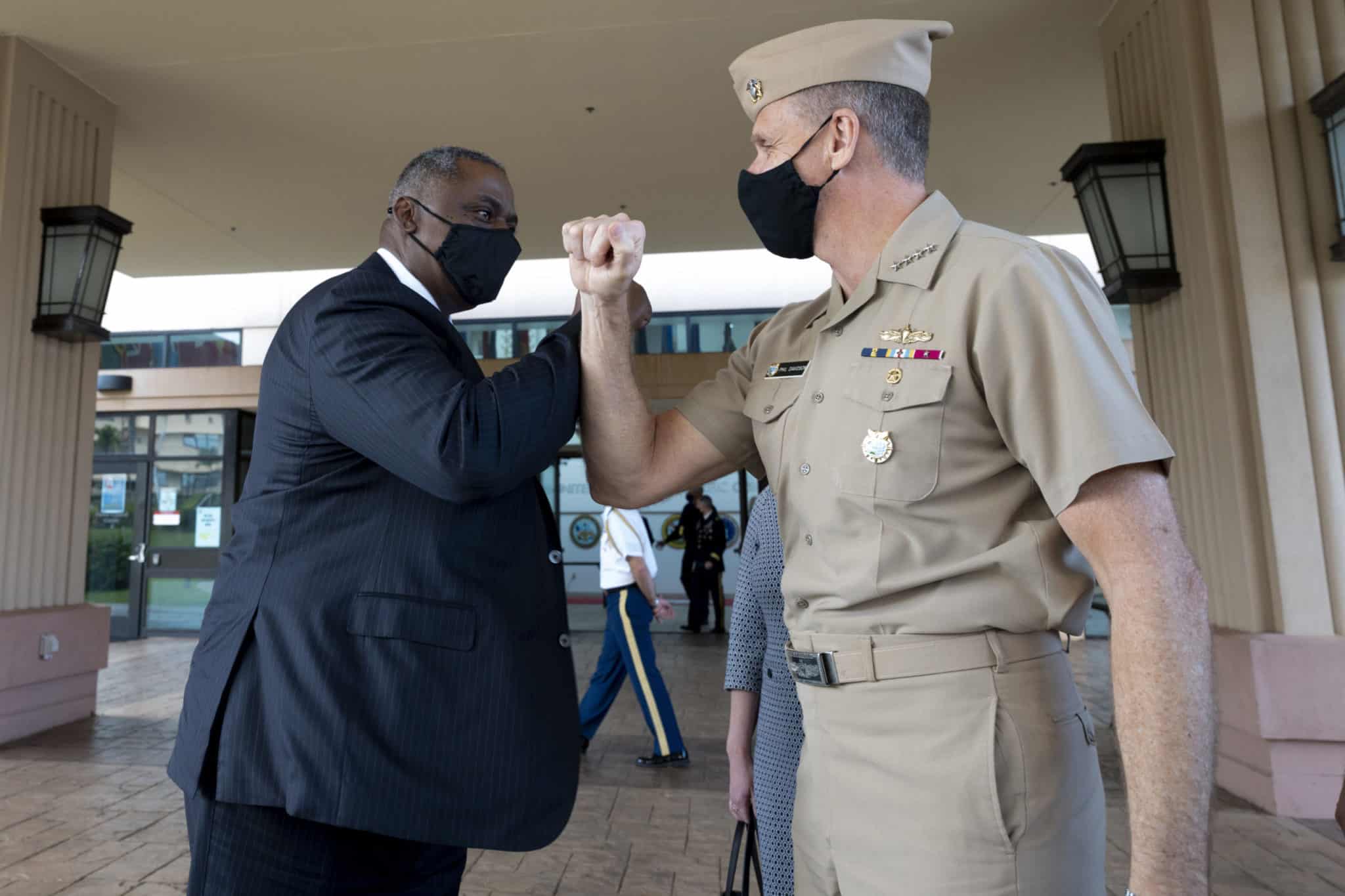 By J Michael Waller / Center for Security Policy / April 9, 2021 – The Pentagon’s new China Task Force is “weak,” with Biden’s policy toward China in such disarray that Beijing can take actions to “shape” it, according to a Chinese Communist Party analysis.

OSINT allows a look into CCP’s analytical and assessment cycle

Defense Secretary Lloyd Austin chaired the first China Task Force meeting on March 1, with the Pentagon saying that it will wrap up its work by July. The administration announced creation of the Task Force in February.

Guancha.cn, a Chinese regime-approved media outlet, analyzed the strengths and weaknesses of the China Task Force in a March 15 article intended for Party members to understand the initiative and devise ways to influence it.

MEMRI translated the article, saying that it “is intended as a guide for CCP decision-makers so that they can assess the backgrounds, characters, knowledge, policy positions, and strengths and weaknesses of the members of the China Task Force.”

The article, by Chinese analyst Cheng Liang, is public but should be regarded as “open-source intelligence,” or OSINT. The piece is valuable because it was written not as propaganda, but to inform those who form opinion within the Party.

In summarizing and extracting from the CCP article, this writer makes no assessment of facts or analysis, but simply reports what Cheng is assessing for CCP usage. By studying what CCP specialists are telling the Party, we can gain insights into how the party views the United States.

‘The PLA should take advantage of the circumstance’

“How should we treat China Strategic Working Group [China Task Force]?” asked Cheng rhetorically. “What might be their main research content? What ‘important results’ are estimated to be achieved? Where will the US strategy toward China go next?”

Cheng observed that other analysts consider the DoD China Task Force as “unprecedented” in scope. “I do not agree with these opinions,” Cheng said.

The Guancha.cn article reviewed a congressional Republican task force on China led by Rep. Michael McCaul (R-TX), saying that it was more comprehensive in scope than Biden’s China Task Force – “their research topics cover the so-called threats from China’s politics, economy, military, and even the epidemic. They had a fairly strong overall nature in the research topics. This was a real strong group for researching and analyzing superpower competition.”

“The highest level of this person’s political resume is when he served during the second term of the Obama administration as Biden’s deputy national security adviser. He can be regarded as a ‘China Master’ in the Biden administration.

“According to reports from the U.S. media, the other 19 members of the team come from military services, the Joint Chiefs of Staff and the regional commands, the military intelligence system, Defense Intelligence Agency, CIA, and a senior researcher in a U.S. civilian think tank. Officials in the U.S. military and intelligence systems account for a large proportion of the group,” according to the analyst in Guancha.cn.

“Compared with the China task force established by the House Republican leaders, this China group has quite a few shortcomings in terms of specifications and organizational systems. The group team leader is just a middle-level official. The group’s lead unit brand is not strong enough…. The team leader’s rank is also a bit low, which is not a problem for this group,” the CCP assessment said.

“Many analyses conclude that the group’s research may be ‘cross-party,’ ‘cross-field,’ and may even become the overall strategic layout, framework, and starting point of the U.S. government toward China in the next four to eight years,” Cheng said.

“I disagree. Compared with the task force, the research of this group will not involve many fields or even create many cross-party, cross-fields research. Its main research direction on Chinese strategy will be specialized in the concerns of the Department of Defense.”

‘The composition of the group is weak’

“Of these two think tanks, only the Center for American Progress’ daily research focuses on soft power games. The Center for New American Security is one of the core private think tanks on U.S. national security strategy, including military strategy. This undoubtedly means that this ‘China Strategy Working Group’ is actually filled with a group of siloviki or nongovernmental figures with a silovik [a Soviet term for career military, security, or intelligence] background.

“Giving these people the task to take a broader and higher perspective from the overall warfare level to examine the Sino-US major power competition relationship exceeded their research capabilities. The relationship was jointly shaped and formed by political, economic, technological, military, ideological and other fields. Even if they try hard beyond their capabilities, such a group of people cannot complete the task in four months.

“The basic attitude of the current administration towards China is a good indicator” of what the Task Force will come up with by July, Cheng wrote. “We mainly need to look at two people, US president and group initiator Biden, and Secretary of Defense Austin who sets directions for the group.”

“Since Biden took office, the few strategic statements he made about China basically continued the argument of the Obama administration. China strategically constitutes a competitive relationship with the United States. It is not the same as the relationship between US and USSR during the Cold War. The United States should contain China on some key issues, but selectively show an attitude of cooperation on minor issues,” according to the analysis.

“Biden’s strategic thinking on China is essentially a simple repetition of US engagement and containment strategy against China over the years,” Cheng said.

“To ensure continuity with the Trump administration’s policy emphasizing the importance of containment. However, this does not mean that the current US government’s relationship with China will be worse than the previous President Trump administration. The relationship between the two countries remains stable on the whole and confrontation in certain areas will be the mainstream.

“Secretary of Defense Lloyd Austin,” the CCP analyst wrote, “may not understand the strategic situation in East Asia and the Indo-Pacific region, nor the strength of the PLA.”

“The attitudes of two people will have a critical impact on Secretary of Defense Austin’s perception of China. The first person is his boss, Biden. Austin has to have a high degree of political consensus with him. The second person is Ratner, his assistant for China affairs and the leader of the group.

“On the one hand, Ratner recognizes China’s attitude towards the United States in East Asia and the destruction of the geopolitical situation in the Far East. He advocates comprehensive Indo-Pacific strategy to launch strategic competition with China and to reshape U.S. influence in this region. On the other hand, Ratner disagrees with complete decoupling from China. He believes that forced decoupling from China is damaging to the U.S.’s influence and may cause damage to the U.S. economy. The correct strategy for China should proceed based on the so-called ‘adjustment and reshaping’ principle,” according to Cheng.

“If this principle and cognition can run through the work of the group, then it is foreseeable that this report will likely be a repetition and reinforcement of Ratner’s original views. The assumption is that they are not affected by the ultra-anti-China factions in the US military system and the US intelligence system. Ratner will likely return to the strategic layout of Asia-Pacific military rebalancing plan of the Obama administration,” in Cheng’s words.

‘For China, we can use our own actions to shape the current US government, especially since the Biden foreign strategy has not taken shape’

“The PLA should take advantage of the circumstance, use its own strong ability and power to suppress U.S. military capability in the first and even the second island chains,” according to Cheng.

“This way, China can not only make the group recognize the real Sino-US power balance and avoid misjudgments in basic situation assessment, but also prompt the Biden administration to abandon unrealistic illusions as soon as possible. China can prompt Sino-US relations to turn to our advantage.”

See the full text of the MEMRI translation here.