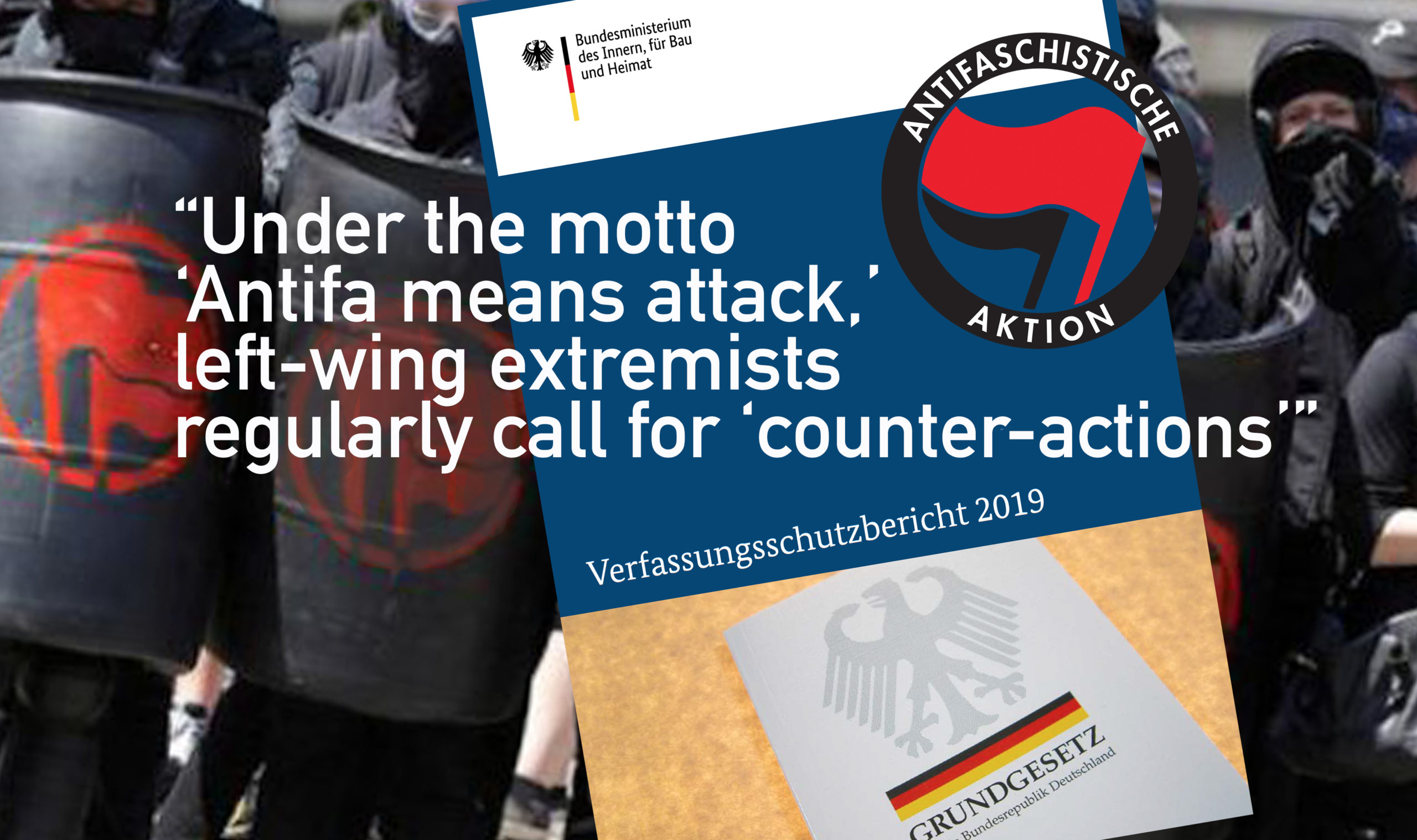 The report comes out as the United States grapples with Antifa-led organized violence coast to coast. It is important because Antifa is a trans-national network that originated in Germany, and is closely replicated elsewhere, including the United States.

Germany provides a teaching tool for the US

Despite years of violent and subversive organizing, Antifa appears to have escaped sufficient scrutiny from U.S. security and investigative organizations. The German report, nearly 400 pages long, provides a good basic unclassified understanding as seen by a Western professional security and counterintelligence service. It is not available in English. The report provides substantial attention to Antifa within the country.

Since reconstruction after World War II, Germany has had a domestic intelligence service precisely for that purpose. The Federal Office for Protection of the Constitution, or BfV, is a domestic investigative agency that monitors right-wing and left-wing extremists, Islamist extremists, extremist foreigners in the country, and foreign espionage threats. The BfV’s parent organization, the Ministry of Interior released the annual report, titled Verfassungsschutzbericht 2019, about extremists including Antifa. We will call the report V2019 for short.

There is a lot we can learn from V2019, which has not yet been translated into English. This article is believed to be the first to carry extensive translations of the document.

Antifa began in Germany in 1932, as the Center for Security Policy’s Kyle Shideler describes in a short history of the movement. It was reestablished in Germany in the 1980s, and later was exported to America.

“The ‘anti-fascist action’ (‘antifa’ for short) is not a clearly defined single organization or structurally consolidated group,” V2019 says of today’s German network.

“The term ‘Antifa’ is currently coined by ‘autonomous anti-fascism,’ which acts on a case-by-case or campaign-oriented basis. Under the motto ‘Antifa means attack,’ left-wing extremists regularly call for ‘counter-actions’ as part of the ‘Antifascism’ action field, to the disadvantage of ‘fascist’ people, groups or institutions, in their opinion. Ultimately, this means the commission of criminal offenses such as property damage, arson or, in some cases, serious bodily harm, in some cases at least including the death of people is accepted,” according to V2019.

Symbols matter, which is why Antifa destroys those it doesn’t like and makes careful use of its own, which dates to Germany in the 1930s. Antifa’s symbolism in Germany is identical to that in the United States: a red banner and a black banner superimposed over a white field and within a broad black circle. This symbol has special meaning, according to the V2019 report.

The black flag element pertains to the “autonomous zones” such as those in Seattle, Portland, and elsewhere. The red stands for building socialism and Communism.

The Antifa symbol “is widely used, particularly in violent left-wing extremism. The symbol of ‘Antifa’ therefore does not only stand for a confrontation with right-wing extremism, but also for the demarcation of ‘bourgeois’ or ‘state-conforming’ struggle against right-wing extremism with the rule of law,” the report says.

“For example, the black flag, which is used next to the red one in the ‘Antifa’ symbol, stands for autonomous anarchism. Autonomous zones are primarily formed in large and/or university cities. The respective zone usually has a central point of contact around which a network of small groups, individuals and local branches of national or nationwide organizations and structures is formed,” according to V2019.

In Germany, the biggest zones are in Berlin, Hamburg and Leipzig. “Not only do they have an above-average level of action and mobilization potential, they also commit a large number of criminal and violent acts. In addition there is a wide, sympathetic and occasionally mobilizable zone environment,” V2019 continues.

Antifa’s ideology: Progressing toward the total destruction of free society

Germany’s security survey of left-wing extremists shows diversity in terms of which strain of anarchism or Marxism they embrace, but a common goal to destroy free democratic society.

“Left-wing extremists want to eliminate the existing state and social order and thus the free democratic basic order. A communist system or a ‘rule-free’ anarchist society should replace them – depending on the ideological orientation with socialism as a transition phase. Topics such as ‘anti-fascism.’ ‘anti-repression’ or ‘anti-centrification’ are event-related relevant, but ultimately interchangeable fields of action that only serve to implement your own ideological ideas,” the German counterintelligence report says.

“To achieve this, left-wing extremists are generally willing to use violence. The ideological families of left-wing extremism are communism and anarchism. Communists primarily rely on Karl Marx and Friedrich Engels, and in part on Vladimir Ilyich Lenin, Josef Stalin, Leo Trotsky or Mao Zedong,” according to the report.

Germany has more experience than almost any country in dealing with extremist intellectualism and politics, and V2019draws distinctions that few American security and counterintelligence professionals are trained to address. Let’s dwell a little on it and take in the nuances of what is, in fact, a basic presentation.

“The foundation of this ideological worldview is the ‘historical materialism’ propagated by Marx as a scientific fact. According to this, the course of history is a development of human society that is legally predetermined by economic processes – from the primitive society to the slave-holding society and feudalism, ‘capitalism’ and socialism to communism,” the German report says.

Here we have a quick lesson about what Marxists mean when they call themselves “progressive” and why they base their frames of conflict on the lines of economic and social classes.

V2019 continues in what could be the easiest description of Marxist progressive theory to take over the world: “In the currently prevailing stage of development – ‘capitalism’ – there is a ‘class struggle’ between the wage-dependent class (‘proletariat’) and the ruling class in possession of the means of production (‘bourgeoisie’). This ‘class struggle’ culminated in the revolution of the ‘proletariat,’ which would abolish all class differences. The ‘violent overthrow of the bourgeoisie’ by the working class led according to the lawfulness of ‘historical materialism over socialism (‘dictatorship of the proletariat’) to communism. Marxists strive for socialism as a transition phase, in which the state remains in parts until development to communism and the society should be prepared for communism.”

Thus we see how Marxists and other extremists seek the violent overthrow of the Constitution.

The anarchists want to overthrow the Constitution differently

The other half of Antifa – the anarchists – are different in how they want to overthrow constitutional society, as V2019explains: “Anarchists set themselves the goal of abolishing all forms of human rule over other people, unlike communists who make absolute the value of socio-economic equality. Anarchists reject socialism just as much as ‘historical materialism.’ They are consistently hostile to the state and want to replace the parliamentary democracy directly with a ‘grassroots democratic’ organized society.”

It seems that the anarchists and Communists would hate one another. But they didn’t during other stages in history like the Spanish Civil War, and they don’t today.

Indeed, as German counterintelligence explains, “Communists and anarchists agree on the absolute need to fight ‘capitalism.’ Left-wing extremists use this term to understand the inseparable unity of a market-based property system and a democratic constitutional state, which serves only to manifest the conditions of exploitation and oppression.”

“‘Capitalism’ as the ‘root of all evil’ is incompatible with the idea of ​​a society based on freedom and equality for all people. The necessary overcoming of ‘capitalism’ could not be achieved through political reforms, but only by overturning the existing state and social order,” according to V2019.

Either way, the Communists and anarchists of Antifa agree, the Constitution must be overthrown.

The German report goes through a detailed set of statistics of political violence in the country, studying right-wing extremism, Islamist extremism, and left-wing extremism. For the latter, V2019 continues.

“The necessary overcoming of ‘capitalism’ could not be achieved through political reforms, but only by overthrowing the existing state and social order,” the report says, providing statistics to a 40 percent increase in leftist violence over the previous year, with a 58% increase in property damage, a nearly 52% increase in politically motivated arson, and two cases of attempted homicide. Most of the leftist violent extremism was concentrated in two regions of Germany.

“The rejection of any form of external determination also results in an aversion to fixed organizational structures. Most autonomists prefer non-binding structures and form small groups based on personal relationships (‘reference groups’). These small groups are in turn loosely connected to other small groups and cooperate with one another as the need arises,” the report says.

There is also the practical security problem to consider: “Other autonomous groups join together in long-term groups and networks based on strategic considerations. This is intended to increase political clout and ensure effective protection against political opponents.

“Depending on the occasion, autonomous organizations also cooperate with non-extremist actors and action alliances, the demands of which are to be specifically expanded to include extremist content and supplemented with a militant component political action. This is accompanied by a sporadic departure from autonomous self-image, which is consciously accepted in favor of better opportunities for social and political influence,” the intelligence report says.

The German Verfassungsschutzbericht 2019 report goes into further detail about the ideology of Antifa and affiliated networks and groups. We will discuss this in a subsequent article.