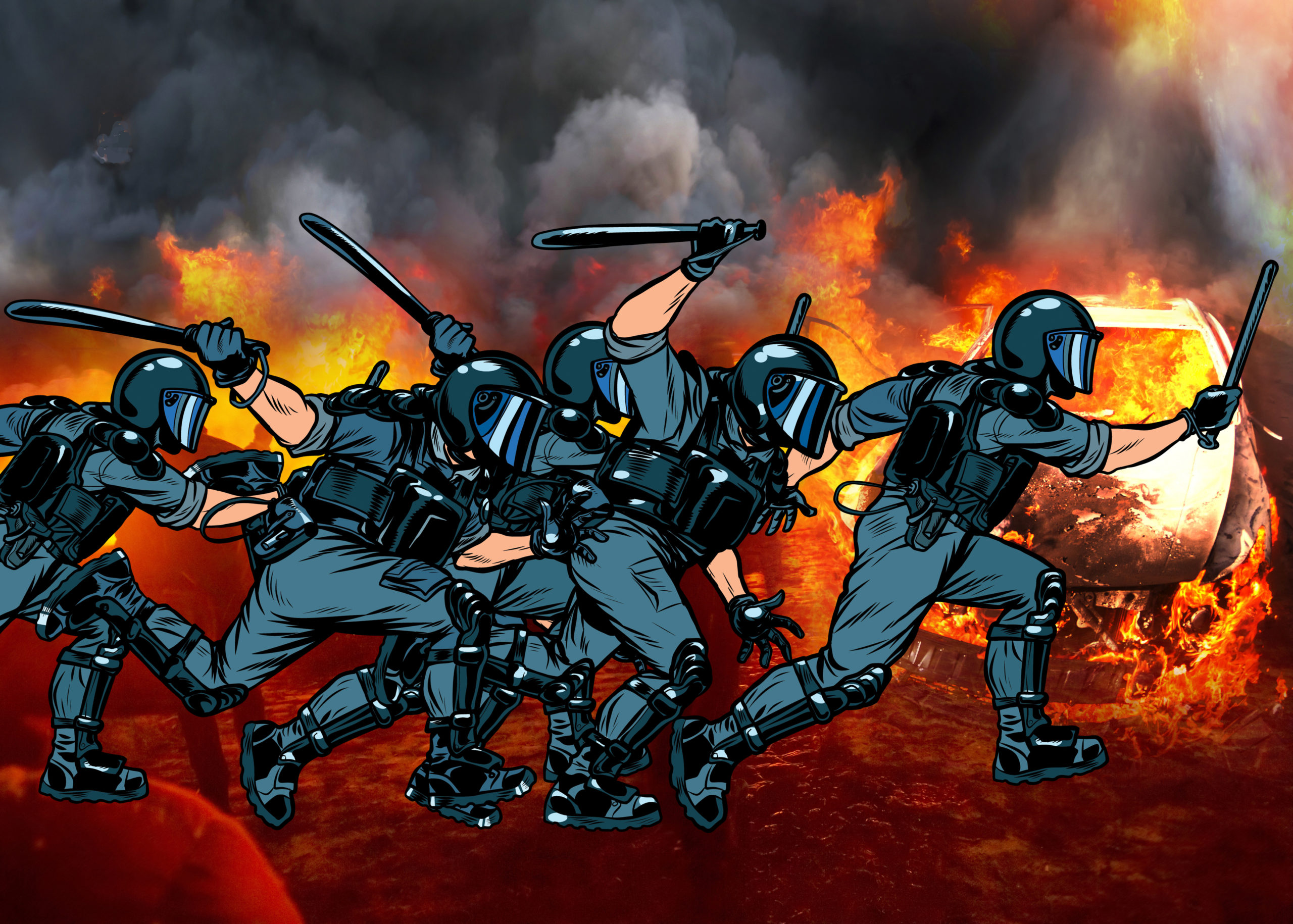 by J Michael Waller / Center for Security Policy / June 16, 2020 – As gratifying as it might be to see a forceful response to the organized anarchy in places like Antifa’s enclave in Seattle, it’s better to wait.

President Trump can defeat his adversaries by being patient and not intervening in Antifastan.

The president has surprised critics by respecting what’s left of our federalist system that the Founding Fathers designed to limit the power of central government. As with the Wuhan Virus relief efforts, Trump is leaving the work up to the states and cities.

With the special exception of the District of Columbia as the seat of the federal government, the Antifa violence and destruction are local problems.

In Seattle where Antifastan has entrenched itself, or Minneapolis or New York where seasoned Islamists and Marxists dominate the local political machines, the leaders have brought these problems upon themselves. They enabled the violent extremists and worsened the situation by trashing their own police.

Presidential patience will let them sit in their fetid britches for a good, long time. The same goes for the voters who elected them.

Presidential restraint is sound constitutional policy. It keeps local problems local and lets locals solve their problems their own way. With the president remaining patient, as a good fisherman would do, federal law enforcement will have an easier time identifying violent extremists who operate interstate. This will allow the feds, already handicapped when fighting violent extremism, to track organized conspirators and take them down with their networks.

Patience is also sound politics. Non-intervention as mayors permit anarcho-communists to destroy their own cities will allow the progressives – as if this is progress – to overplay their hand. It will also permit the public to see what such progressives would do to America if allowed to control the levers of national power.

Deprive the extremists of the enemy they need

Presidential patience deprives the progs of the dangerous enemy they want and need. The specter of mass “repression” is the glue that binds them. Revolutions always eat their own. Deprived of repression, the progs will ultimately fight among themselves. They already have begun to bicker and blame each other, and denied an outside enemy, this will only get worse for them.

More broadly, many of the voters who elected the Antifa enablers will develop second thoughts. Suddenly this fanatical destruction isn’t abstract to them anymore, but right in their homes. This is good. Any outside intervention from the Trump Administration right now would only unite and energize an enduring, broader movement around Antifa’s hard core.

This brings us to the outermost orbit around that core: That reluctant, confused liberal mainstream torn between old-fashioned patriotism and the desperation to pander to the hate-filled mobs.

The president’s patient non-intervention in Antifastan has the added benefit of forcing the mayors’ national-level political allies – the president’s personal adversaries – into a miserable lose/lose situation.

The more time passes, the tougher it’s going to get for politicians like Joe Biden who aren’t fanatics themselves but who desperately need those big urban machines. Presidential patience will deny those candidates the demonic enemy they need – Donald Trump – and force them into a hellish set of losing alternatives.

Look at the hand Trump’s patience would deal to them.

Trump’s rivals could appeal to the middle and condemn the violence and support law and order – only to get branded a racist or fascist. They would alienate their militant activist networks, special interest backers, and fanatical high-dollar donors.

Or they could try to appease the extremists by excusing, explaining away, or otherwise going along with the Antifastani destruction, thus alienating the millions of average American voters who dislike or feel ambivalent about the president but now see Trump as their only protection against violent extremism and the larger Marxist agenda that goes with it.

More likely, though, such politicians will wilt into a weak, wishy-washy position that pleases nobody and alienates all. Not a winning plan for them.

The practical side: Deny Antifa the martyrdom it needs

Then there’s the practical side of presidential patience. Antifa and its supporters desperately want to provoke a harsh police or military reaction. Revolutionaries need repression to create genuine, enduring public outrage against the system. Today they want to goad President Trump into over-reacting.

Any decisive uniformed action, under the current public mood, will inevitably result in some awful images and human casualties. Professional revolutionaries don’t tend to martyr themselves. They manufacture martyrs by offering up innocent dupes or idealists as sacrifices for the larger cause. This sick strategy can’t materialize with presidential patience.

Divide Antifa from its allies

Powerful actions from the central government, at present, will unite Antifa and its allies into a hard core, provide a common purpose between the violent extremists and angry citizens who have not yet gone violent, and risk creating an atmosphere that would justify the violent extremism further into the liberal political mainstream.

But with patience and restraint under current conditions, the less fanatical activists will ultimately get bored with inaction and lack of what they perceive as accomplishment.

Mob mentality requires constant action and stimulation. Once the excitement dies down, people start thinking about their own self-interest again. Some will fall away. Others will bicker with one another and start searching for scapegoats within their ranks. Many will lose heart with their leaders and their cause. Most will look for a way out of their mess.

The remains will be a San Francisco-like tent city of vagrants, needles, and feces.

The organized professional extremists will make their own mistakes, too. Like other fanatical movements, they will see complainers as traitors, treat people harshly, speak and act in more visibly extreme ways, widen fissures within their coalition, and start to self-destruct.

Naïve and devoted activists who get branded as traitors often become some of the best police informers and prosecution witnesses because, in the end, they want to do the right thing – or at least not pay a price for having done wrong.

Winning: The president becomes the rescuer

Once each Antifastan starts to self-destruct into its own fetid cesspool, average citizens intimidated by the extremists or alienated from the administration will overcome their fear. Many of these new deplorables will view President Trump as their rescuer, if only he would do something.

But the president doesn’t have to do anything because these are all local problems. Unless the situation gets so out of control that the most serious federal crimes are being committed. Then he is obligated to intervene and much of the public will thank him.

Or, even better, he won’t have to intervene unless the local authorities who enabled the crimes finally buckle under the anger being directed at them and, for their personal self-interest, beg Trump for relief.

The Joe Bidens of the world already have abdicated their role as mature, moderate leaders for the mayors to follow. All that remains for them is the humiliating option of lashing out madly but meekly going along as they turn to a patient Donald Trump.