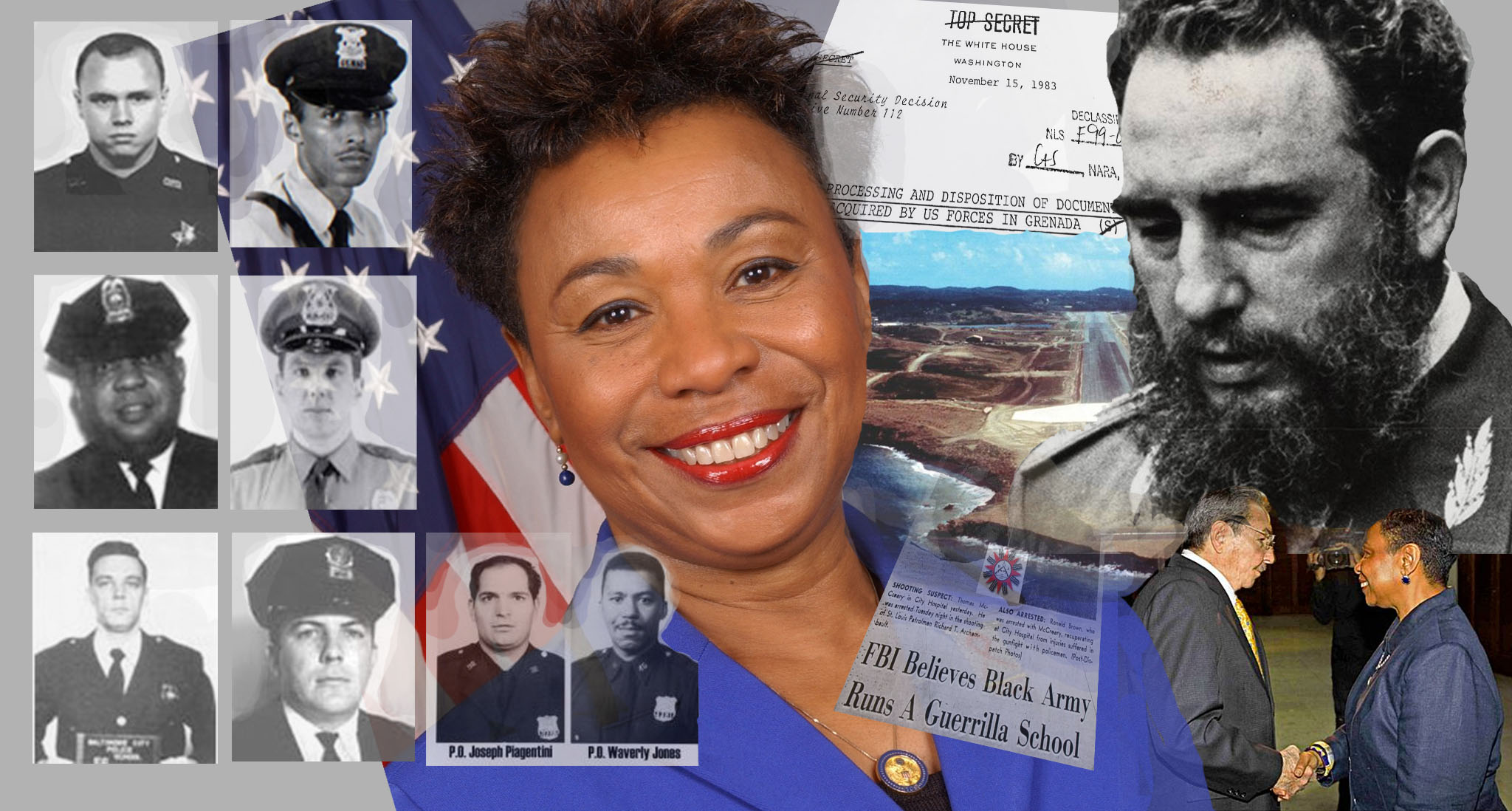 This week the 12-term Lee assumed chairmanship of the House subcommittee in charge of the State Department budget.

Lee’s entire adult career has been on the outer fringes of California political extremism – first as a militant among 1960s and ’70s radicals and cop-killers, then as a longtime congressional staffer and, finally, a Member of Congress. This article shows how Barbara Lee:

‘Lee is a long-practicing supporter of America’s enemies’

Probably nobody on the outside knew of Barbara Lee’s activities than Herbert Romerstein, the late House Intelligence Committee staffer  who ran the State Department’s short-lived Office to Counter Soviet Disinformation and Active Measures. Romerstein had been a Communist in his youth and spent the rest of his life tracking them. He knew what to look for.

Lee had been a congressional staffer almost two decades. She was elected to Congress in 1998 to succeed her former boss, Rep. Ronald V. Dellums (D-CA).

Romerstein wrote in 2001, “Ms. Lee is a long-practicing supporter of America’s enemies – from Fidel Castro on down.”

David Horowitz would agree. He had been New Left militant who once supported the Castro regime, the Black Liberation Army, the Weather Underground and other domestic extremists. When Lee’s group smashed in the skull of a woman whom Horowitz knew, he began his break with the Left.

He said that Lee’s supposed pacifism is fake: “Barbara Lee is not an anti-war activist, she is an anti-American communist who supports America’s enemies and has actively collaborated with them in their war against America.”

Lee surrounded herself with Communist Party members and agents who were then under Soviet control. This network became her home base.

Romerstein wrote of one example: “Ms. Lee told The Progressive magazine that her life was influenced by the late Carlton Goodlet. That explains a lot. Goodlet was a dedicated Stalinist and served in the leadership of the international Soviet front, the World Peace Council. He used a newspaper he owned to spread Soviet disinformation and to promote KGB forgeries.”

Lee became a militant activist in the 1960s, and by the early ’70s was promoting Black Panther leader Bobby Seale and became an aide to Black Panther “Minister of Defense” Huey Newton, according to Discover the Networks.

Newton, who murdered a man with a steak knife in 1964, shot Oakland Police Officer John Frey to death when he was released. He later murdered an underage prostitute and fled to Cuba, where Lee visited him.

The Black Panthers murdered Betty Van Turner, who worked at a school run by the Panthers. They smashed in her skull. Police never solved the crime, but David Horowitz, who had gotten Turner the job at the school, described in one of his books how the Panthers had done it.

Among the leadership of the Black Panthers, Lee wrote in her book, Renegade for Peace & Justice, “I was known as ‘Comrade Barbara’ at the time.”

The Black Panthers and their successor Black Liberation Army were Marxist domestic extremist groups and criminal enterprises that murdered 35 police officers across the country.

RAIR Foundation published the names and faces of each of those officers. Oakland Officer Frey was the first to die, when Newton allegedly shot the policeman with his own gun. California courts released Newton after successive trials.

Barbara Lee became attracted to Newton after his cop-killer fame had begun.

Shortly after a Communist junta took over Grenada in 1979, Lee, as a staffer to local congressman Dellums, served a counterintelligence function in Washington for the Cuban-backed regime.

Along with Michael Ledeen, Romerstein was the principal US official to edit the captured secret documents of the Communist regime in Grenada, which President Reagan toppled in 1983. They found documents incriminating Dellums and his staff, including Barbara Lee. (The Pentagon archived those documents here, but since has taken them down.)

One of the captured documents was a  memorandum by a Communist diplomat in Washington whom Lee assisted to unmask alleged spies:

“On May 14, 1980, Barbara Lee called to say she had received a piece of anti-PRG [People’s Revolutionary Government] propaganda stamped from the Prime Minister’s Office, post-marked in Grenada. We collected it May 15, and it is herewith attached.“Some obvious questions are: –“What concerns us is: How is is possible for such vicious anti-government propaganda to be mailed and stamped from the Prime Minister’s Office to a friendly Congressional Office?“Who?“How?“Barbara says that all those U.S. persons who went to Grenada for The First Anniversary [of the revolution] have been receiving G.I.S. News Releases regularly. Should this be so? To her knowledge, no one else except she has received this particular piece of anti-PRG material.“Please advise us at an early time if this was a known or unknown error; if a conspiracy and/or sabotage, and how to handle it.

“Neither ‘Shampoo’ Norbert Douglas our Security Officer at the Mission here, nor I have a clue on this. Only speculations … A spy inside the Ministry? … Please advise.”

Barbara Lee, the Grenada documents showed, worked with the Cuban government to devise a phony report on a military airstrip that Soviet bloc entities were building on the Caribbean island.

The Reagan Administration had warned that the lengthy strip at Point Salines could accommodate any Soviet strategic aircraft, and for shorter-range aircraft provided a triangle of total coverage with Cuba and Nicaragua over the entire Caribbean.

So important was the facility to Soviet strategic plans in the American hemisphere that Moscow sent GRU general Gennady Sazhenev, a former deputy defense minister of the USSR, to oversee the project. Sazhenev began his career in the Soviet strategic nuclear bomber forces, and was in Cuba when Nikita Khrushchev ordered nuclear missiles placed there in 1961 and 1962, provoking the Cuban Missile Crisis.

It was a high regional Soviet priority to ensure that Reagan made no move against the fragile, barely defended Grenada regime. That’s where Communist party operatives and their assets like Lee came in.

Lee was in the perfect position to help. It was April, 1982. Her boss, Dellums, chaired the House Armed Services Committee’s Subcommittee on Military Construction. They would use that panel to claim jurisdiction of the fake congressional investigation.

Lee and fellow Dellums staffer Carlottia Scott worked to prepare the 66-page alse report for Congress to attempt to show that the Point Salines runway was for tourism, not Soviet aircraft.

The captured documents show what happened. Before submitting the draft to the Dellums panel on the House Armed Services Committee, Lee hand-delivered the draft to Grenada’s Communist leader, Maurice Bishop. Minutes of a Grenada politburo meeting kept the record:

“Barbara Lee is here presently and has brought with her a report on the International Airport done by Ron Dellums. They have requested that we look at the document and suggest any changes we deem necessary. They will be willing to make the changes.”

Lee brought the draft back to Washington and gave it to Dellums, who presented the report to the House Armed Services Committee as an impartial and professional “staff investigation.”

Dellums told Congress that “nothing being done in Grenada constitutes a threat to the United States or her allies.” President Reagan’s concerns about the Cuban-built airstrip for Soviet aircraft, it messaged, were unfounded.

Scott, along with Dellums, had a long and intimate relationship with Soviet international front organizations. The largest was the World Peace Council (WPC).

She was an executive committee member of the WPC’s American chapter, the United States Peace Council (USPC), which the FBI described as being under Communist Party USA control.

Romerstein: “In 1981, Ms. Lee wrote to the World Peace Council asking that the Soviet front pay for air tickets for California Rep. Ron Dellums and two staffers to attend one of their conferences.”

This writer infiltrated the World Peace Council and personally witnessed Barbara Lee as a knowing participant in a Soviet active measures operation aimed against the United States.

The Soviet operation was the World Peace Council’s international conference in Copenhagen, Denmark, in October 1986, to coordinate a global Soviet active measures campaign against the United States.

Chandra was a Soviet agent and a member of the Communist Party of India.

After the Soviet collapse, the Communist Party USA – always slavishly loyal to the Kremlin – broke into splinters. Lee was on the National Coordinating Council of one of those CPUSA splinters, the Committees of Correspondence for Democracy and Socialism (CCDS).

Lee denied her relationship with CCDS after Romerstein exposed her. “When I wrote an article for Human Events exposing the C of C and identifying Ms. Lee, she first denied the whole story, but then admitted it. C of C decided to no longer list some of their leaders,” Romerstein wrote.

As a Member of Congress, Barbara Lee worked with Communist leaders in Cuba to persuade the Obama Administration to grant unconditional US diplomatic recognition of the regime in 2009.

When Fidel Castro died in 2016, Lee eulogized, “I was very sad for the Cuban people. He led a revolution in Cuba that led social improvements for his people.”

For more on Barbara Lee, see: