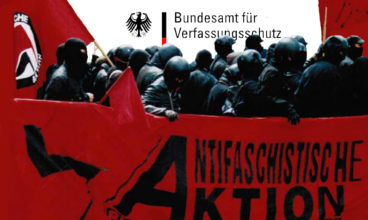 J Michael Waller / Center for Security Policy / September 15, 2020 – To understand Antifa and its broader movement free from the lenses of American politics, the German government is very helpful.

German domestic intelligence has a warning: Antifa and its allies are going to get more destructive and more violent.

“There is a change in the forms of action from mass militancy to clandestine small group actions,” according to an updated German Interior Ministry report issued over the summer.

“The target selection of left-wing extremist attacks is shifting more and more often from an institutional level to a personal level. Serious physical injuries to the victims up to possible death are accepted with approval,” the report says.

German analysts anticipate “the formation of terrorist structures in left-wing extremism appears possible under these conditions,” according to the report.

The official report pertains to the original Antifa network and other violent extremist groups in Germany. The FBI issues no such regular reports. Since movement in the United States and other countries originates in Germany and has tended to lag behind German Antifa tactics, the German reports allow insights into what the US should expect next.

The report allows us to draw parallels between how Antifa operates in Germany’s federal system of states and how it operates in the United States.

“A high level of radicalization of the violence-oriented left-wing extremist scene is recognizable nationwide, but the development is not the same in all federal states,” the report says.

“For Saxony, Hamburg and Berlin but also in Thuringia, Bavaria and Bremen there are indications that that a small part of the violence-oriented left-extremist scene is becoming increasingly radicalized,” according to the report. “In Leipzig in particular, a focus on the increasing radicalization of violent left-wing extremists has emerged.”

“Radicalization can currently be measured by two qualitative indicators: the change in acts and the change in the scene,” according to the report.

“Change in acts” refers to what the report calls “a change in the forms of action from mass militancy to clandestine small group actions. The target selection of left-wing extremist attacks is shifting more and more often from an institutional level to a personal level. Serious physical injuries to the victims up to possible death are accepted with approval.”

We can see parallels with the intensification of Antifa-related violence in Portland, Oregon, from protective gear to offensive small scale, home-made, or improvised devices to destructive and deadly fireworks and firearms.

“Changes in the scene: In several federal states there are indications that clandestine small groups are developing within the violence-oriented left-wing extremist scene, commit their own acts and, due to an increasing willingness to use violence, act on their own,” the German report says.

Autonomous action is an Antifa hallmark, in which individual militants can operate freely and not necessarily under a conventional command-and-control, much as al Qaeda and ISIS did in the Islamist sphere.

“In the context of the ‘defense of open spaces’ [autonomous zones] in the fight against urban restructuring and against political opponents – especially (alleged) right-wing extremists – the left-wing extremist scene increasingly seems to legitimize acts of high violence,” according to the report, which placed the word “alleged” in parentheses.

“The formation of terrorist structures in left-wing extremism appears possible under these conditions,” the report says.

In June, the daughter of the late German terrorist Ulrike Meinhof, leader of the Red Army Faction (RAF) or Baader-Meinhof Gang, wrote an op-ed that “Antifa is something like an official RAF, a terrorist group with money from the state under the guise of [fighting] against the right.”

The German Interior Ministry is mindful of any white supremacist, fascist, or neo-Nazi activity and since establishment of the federal republic after World War II has infiltrated, disrupted, and shut down extreme right-wing illegal networks. Its annual report, the Verfassungsschutzbericht, shows a consistent, even-handed approach against all extremists that threaten the German Constitution from Left and Right.

In July, the Center for Security Policy was the first to report in English on the Verfassungsschutzbericht about Antifa and its allies.