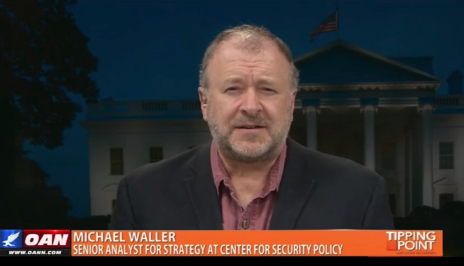 After more than 35 years, the Center for Security Policy‘s J. Michael Waller spoke publicly about why he joined up with the Nicaraguan Contras in 1984.

The Center for Security Policy’s Senior Analyst for Strategy and Michael Johns were college students at the time, editors of their respective newspapers at the George Washington University and the University of Miami. One America News interviewed them about how and why they got involved.

“What brought you gentlemen to Nicaragua in the ‘80s in the first place, and what it was that you hoped to accomplish during your time there?” said host Kara McKinney on Tipping Point.Tipping Point – Contras in Nicaragua with J Michael Waller and Michael Johns

“We were teenagers back then, in college, intrigued by geopolitics, very committed to the Reagan vision of a strong America in the world, and also anti-communism – and sympathy and support for those who were rising up globally against it. That ultimately came to formulate what was known as the Reagan Doctrine,” Michael Johns said. (Waller was 21 years old at the time.)

“The US should be supporting those individuals who rise up against repressive Communist regimes as part of our Cold War struggle,” Johns said.

Supporting the Reagan Doctrine to undermine the Soviet empire

“In the 80s we were student journalists and we were supporting President Reagan,” Waller told McKinney.  “The Left was really strong back then supporting the Communists in Central America, and doing everything possible to prevent President Reagan from resisting them.”

“So I thought it would be a good story to go down there as a student journalist, cover it there. And through contacts at the White House I went down and invited Mike along, and that began a seven-year experience working with the Contras and ultimately training them and helping them build a political party,” Waller said.

This all happened well before the OANN host was born. “Take me back to what it was like during the Cold War,” McKinney said.

“The Soviet Union was expanding its presence around the world to choke us off,” said Waller, “and in our own hemisphere it had expanded its nuclear bomber base in Cuba, which it still uses today flying its Tu-95 bombers off our Atlantic Coast … and supporting Third World insurgencies.”

“These were communist guerrilla movements and terrorist movements and subversive political movements that worked with them in a really, extremely well-run intelligence operation that was run by the Cubans under Soviet control,” Waller said.

“T problem was, to get a Soviet foothold on the mainland of the Americas would be a mortal blow to our country. Imagine having the USSR with a military foothold on our continent. It never happened before,” he explained.

‘This progressivism is totalitarianism. We’re going to fight these guys.’

“So supporting the Nicaraguan Resistance, the Contras, was key. Here you had a broad-based peasant army that had raised itself as an army – the CIA only came around later. It was a self-funded … guerrilla army that the US later supported … and it built itself with former Sandinistas, people who were enamored of the Sandinista revolution and then immediately realized, hey, this progressivism is totalitarianism. We’re going to fight these guys,” Waller said.

“So Mike and I went down there to chronicle this and to tell the word of the contras because they were getting the same disinformation campaign waged against them as we’re witnessing today on many other issues. The truth was completely distorted and these really wonderful people in this peasant army were being blamed for the acts of a small few, when it was really a legitimate, broad-based cause of a people’s revolution.”