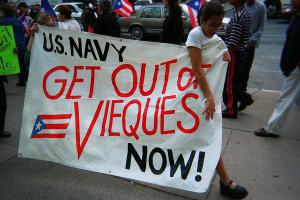 Cuban leader Fidel Castro may have fainted during a recent tirade in Havana, but his American foot soldiers who once heralded his Marxist revolutionary movement around the world are alive and well. After more than a decade of obscurity, they’re back with a passion not seen since the Sandinistas made war against Ronald Reagan.

Like Castro they’re a little grayer and a little flabby, but their militant spirit is as strong as ever. And they have a whole new generation of young people in tow. Where once they supported practically any group that could lob a bomb at a Yankee, their new mantra is for the Yankees to stop the bombing.

Nor is their battleground Managua or Palestine or some other far-off place. As El Barbudo himself once promised, it’s right here on American soil: the Puerto Rican island of Vieques. It’s part of a growing, networked movement to oust the U.S. military from bases around the world.

The U.S. military has used Vieques as a training ground to practice amphibious invasions under realistic air- and seaborne bombings and strafings since before the attack on Pearl Harbor. The island is the only available place in the Atlantic Ocean affording perfect practice conditions. And nobody but Castro, a few Marxist separatist groups and their supporters and a handful of antimilitary activists called the Committee for the Rescue and Development of Vieques (CRDV) raised a peep. That is, until April 1999, when two errant 500-pound bombs from a Marine F/A-18 jet accidentally killed a civilian security guard at Camp Garcia on Vieques’ eastern test range. David Sanes Rodriguez, whom the left otherwise would have regarded as a tool of the U.S. military, suddenly became a martyr and icon for Puerto Rican independence.

The CRDV, whose two decades of unnoticed activism seemed almost fruitless, helped set up a New York-based umbrella organization called the Vieques Support Campaign (VSC) for agitprop on the U.S. mainland. Little of the “U.S.-out-of-Vieques” campaign is homegrown. During the last two years, more than 1,200 demonstrators have been arrested for trying to break into, vandalize or otherwise disrupt Camp Garcia.

Almost none of the protesters are from the island. U.S. military sources tell me that of the 180 demonstrators arrested between April 27 and May 1, only four were local: “The rest were imported for the occasion.”

Much of the Vieques activism comes from left-wing political organizers in the New York City area. At the 2000 Democratic National Convention, Rep. Nydia Velasquez, D-N.Y. – a Puerto Rican-born congresswoman and veteran supporter of Marxist revolutionary movements in the Caribbean region – called for the U.S. Navy to stop bombing Vieques while about 300 people in the New York delegation held up anti-Navy signs.

Despite the far-left origin of the protests – a Clinton White House official tried in vain to suppress the anti-Navy activism at the Democratic convention – mainstream Republicans led by New York Gov. George Pataki have climbed aboard the U.S.-out-of-Vieques bandwagon. As Insight‘s Jamie Dettmer first reported (July 2-9, 2001) White House political director Karl Rove then took the opportunity to try to attract Puerto Rican votes in the United States by sending the Navy packing.

The movement is led by and attracts extremists, such as Lolita Lebron, whom the New York Times describes as a “hero to many Puerto Ricans.” Lebron wants the United States out of Vieques and is active in the movement. She was one of four militants who shot up the U.S. House of Representatives in a 1954 terrorist attack – part of the same movement that had tried to assassinate President Harry S Truman. President Jimmy Carter pardoned her in 1979.

Though she says she has renounced violence, Lebron has inspired much of the civil disobedience that drew press attention on Vieques. In Havana, Castro has sponsored huge demonstrations in support of the Vieques protesters and personally recognized Puerto Rican protest organizers under his patronage.

On May 30, the Cuban government sponsored an anti-imperialist tribunal in Havana, mobbing 100,000 protesters in front of the U.S. Interests Section to denounce the U.S. Navy in Vieques. Puerto Rican Sen. Fernando Martin, executive director of the splinter secessionist Puerto Rican Independence Party, thanked Castro for his support.

Is Cuban intelligence behind the protests? U.S. counterintelligence officials tell me that it is. On June 7, the Cuban government’s top official responsible for supporting foreign political and revolutionary movements visited Puerto Rico. Jose Antonio Arbezu, director of the America Department of the Cuban Communist Party, paid a visit to the U.S. island in a delegation led by the chief of Cuba’s rubber-stamp Legislature, Ricardo Alarcon.

But Calderon said that although she rejected the Cuban government’s support for her anti-Vieques activism, she wouldn’t attempt to block the operative’s visit, saying, “I don’t know the purpose of his visit, but it merits the respect that one should give any human being.”

This attitude only has helped guarantee that the protests remain in the hands of extremist militants – and far out of the Puerto Rican mainstream. The VSC promotes the causes of the Puerto Rican Armed Forces of National Liberation (FALN), a terrorist group responsible for 130 bombings and six murders between 1974 and 1983. It says FALN members in federal prison are “political prisoners,” adding, “The burning issue in Puerto Rico at present is not FALN bombs but Navy bombs.”

Red Betances, a San Juan-based network behind many of the protests, hosts a coalition of groups that includes the Macheteros, a terrorist organization responsible for a wave of bombings and killings in Puerto Rico and the United States, including the 1981 attack on a Puerto Rican Air National Guard base. Machetero member Victor Manuel Gerena remains on the FBI’s 10 Most Wanted List and currently is a fugitive being protected in Cuba.

The VSC’s Website features ads demanding the release of Marxist revolutionaries in prison for murder of police officers and FBI agents, terrorist groups such as the FALN and Macheteros, cyber-operations including Red Flag On-Line and subscriptions to the Cuban Communist Party newspaper Granma. It provides “links in solidarity” with other “struggles” around the world, including the Revolutionary Armed Forces of Colombia narcoguerrillas.

The VSC states, “Solidarity with the struggles of all oppressed peoples is a requirement for carrying out our own liberation struggle. We therefore demand the release of incarcerated freedom fighters like Mumia Abu-Jamal, Leonard Peltier and the six Puerto Rican political prisoners.” Abu-Jamal awaits execution for the murder of Philadelphia police officer Daniel Faulkner. Peltier is in federal prison for the 1975 murders of FBI Special Agents Jack R. Coler and Ronald A. Williams.

The six Puerto Rican “political prisoners” are FALN members serving time for terrorism-related crimes. The VSC also supports the destruction of Israel, according to its literature, backing Palestinian demands “calling for an end to the U.S.-backed Israeli state.”

Anti-Navy organizers recognize the importance of Vieques to U.S. military readiness. According to a VSC position paper, “In getting the U.S. Navy out of Vieques, we will not only score a victory for the people there, but also deny the U.S. military network a key strategic launching pad for its military invasions in other parts of the world.”

A propagandist for Iraqi dictator Saddam Hussein agrees. “The Puerto Rican peoples’ struggle to get the U.S. Navy out of Vieques will certainly weaken the greatest enemy humanity has ever known,” Kadouri Alkaysi wrote in an open letter to the Vieques activists. “This in itself is an act of solidarity Vieques is rendering to the Iraqi people.”

What is good for Vieques also is good for Okinawa, Japan, according to organizers. “Warm and fraternal greetings from the Island of Vieques, Puerto Rico,” wrote Robert Rabin of the CRDV to anti-U.S. organizers in Okinawa in 1999. “We are together in a struggle to end U.S. military activity in our communities.” Subsequently, the movements to force the U.S. military from both Vieques and Okinawa developed operational ties. In July 2000, thousands of protesters formed a human chain around Kadena U.S. Air Force Base in Okinawa. Veteran Vieques activist Carlos Zenon, who has been battling the U.S. Navy since 1978, was a keynote speaker at the Okinawa protest. He boasted that his activists disrupted U.S. military operations 38 times between 1978 and 1983, that he was jailed in 1980 and that he was behind the movement to set up protest camps on Puerto Rican military facilities.

Zenon coached the Okinawans on how to mount effective protests against the U.S. military. “I want you to listen very carefully to what we’ve done next because this is the way we deal with the United States Navy,” Zenon said. He then offered Japanese organizers a seminar on how to generate the most publicity through civil disobedience and how to distract U.S. military personnel with diversionary moves so others could break into the base.

Japanese and Puerto Rican activists are developing common strategies to oppose training on both islands, “including coordinated acts of civil disobedience and the creation of a permanent Okinawa-Vieques action and information network,” according to a left-wing New York activist magazine. “Vieques activists have also found support in Korea, Hawaii and the Philippines, where U.S. military installations are blamed for environmental contamination and violations of civil and human rights of local residents.”

The standard phalanx of liberals and lefties has followed the hard-core vanguard in the battle for Vieques. In February, hundreds of Vieques activists converged on Congress and met with about 100 lawmakers. New York activist Al Sharpton and three local politicians were jailed for illegal protests at Camp Garcia. A few fringe congressmen and Hollywood figures also got themselves arrested.

Rep. James P. McGovern, D-Mass., released a letter in June saying, “What the U.S. Navy is doing in Vieques is wrong. It is wrong for the U.S. Navy to conduct bombing exercises in Vieques. It is wrong for Puerto Rico and it is wrong for the United States.” As an aide to the late Rep. Joseph Moakley, D-Mass., in the 1980s, McGovern was one of the most hard-core Capitol Hill staffers helping the Sandinistas in Nicaragua and the Marxist-Leninist FMLN guerrillas in El Salvador.

Rep. Sheila Jackson Lee, D-Texas, hinted that the Navy’s bombing was motivated by racism: “I question whether they would be as cavalier with other islands,” she said. In mid-June, Vermont Sens. Patrick Leahy, a Democrat, and James Jeffords, an independent, backed by a Woodbury, Vt.-based solidarity committee organizing statewide campaigns, sent a letter to Defense Secretary Donald Rumsfeld. The letter, released by the CRDV, called for “immediate and permanent cessation of plans to carry out naval exercises during this coming week.”

Robert F. Kennedy Jr. made a quick photo-op visit June 18, telling protesters outside Camp Garcia, “We will not allow one more bomb to be dropped on Vieques.” Jacqueline Jackson, wife of activist Jesse Jackson, immediately became a cause celebre after her arrest for trespassing. Her husband called reporters to say authorities placed her in solitary confinement after she refused to submit to a body-cavity search – something the Navy denies. “They’re punishing her because she would not let them search her private body parts,” Jackson complained to Reuters. “Now I’m on my way to Puerto Rico.”